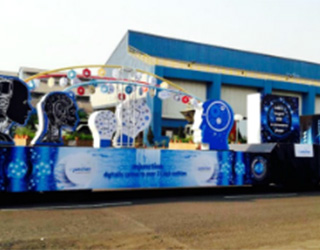 Like every year, mjunction participated in the Founder’s Day parade in Jamshedpur on March 3. A contingent of around 50 mjunction employees marched along with the float in the parade that was attended by top Tata Group officials and other dignitaries.
The mjunction float was covered in Prabhat Khabar, the leading Hindi newspaper of Jharkhand, and was also put on display.